Against the sellout of the city!

For the preservation of Hermannstraße 48! 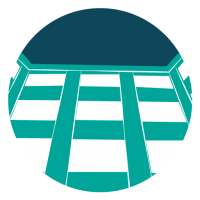 Our house was sold!

At the start of 2021 we found out that our house, Hermannstraße 48, had been sold.
In light of the recent developments in Schillerkiez (and the whole of Berlin) it was quickly clear that this was bad news. Displacement, gentrification and real estate speculation have been destroying our neighbourhood for years. Now gentrification had arrived right on our doorstep.

For us, there was never any doubt that we would do everything to prevent luxury renovation, conversion to condominiums and termination of rental contracts. We therefore asked the district of Neukölln to make use of the right of first refusal (‘Vorkaufsrecht’).
There followed two very stressful and hard-working months, in which we organised ourselves and built networks with other house communities. Together with the Mietshäuser Syndikat and many supporters who offered direct loans, we were finally able to persuade both the bank and the district of Neukölln to let us buy Hermannstraße 48 ourselves!

At the end of February we were able to celebrate a first, partial success: the district exercised the right of first refusal in our favour. The possibility of turning the H48 into a communally run project as part of the Mietshäuser Syndikat was now within touching distance.

Both the seller and the buyer filed a lawsuit against the district’s decision to make us a third-party buyer in September 2021.

Two months later, at the start of November 2021 – while the lawsuit was still ongoing, a judgement from the Federal Administrative Court dealt us a bitter blow. This judgement rendered the entire communal right of first refusal across the country as good as useless. Since then, it can no longer be used as an instrument against displacement and to protect renters. This is not only a catastrophe for all houses that will be sold in the future, but also means insecurity for the houses that have so far been protected by avoidance agreements (‘Abwendungsvereinbarungen’).

We have therefore joined the initiative ‘New right of first refusal now!’ Our joint press release has already been signed by countless housing associations and urban policy initiatives.
More information is available at neues-vorkaufsrecht.jetzt (so far only available in German).

The ‘traffic light’ coalition in the German government has so far done nothing to restore a legally secure right of first refusal.

To our great regret, the district decided in early 2022 to withdraw the notification of pre-purchase (‘Vorkaufsbescheid’).
The sale to a real estate company thus became legally binding.
We will, however, not give up, but will continue to fight for our home and for the right to stay of those who live here.

Who are we and what are we fighting for? 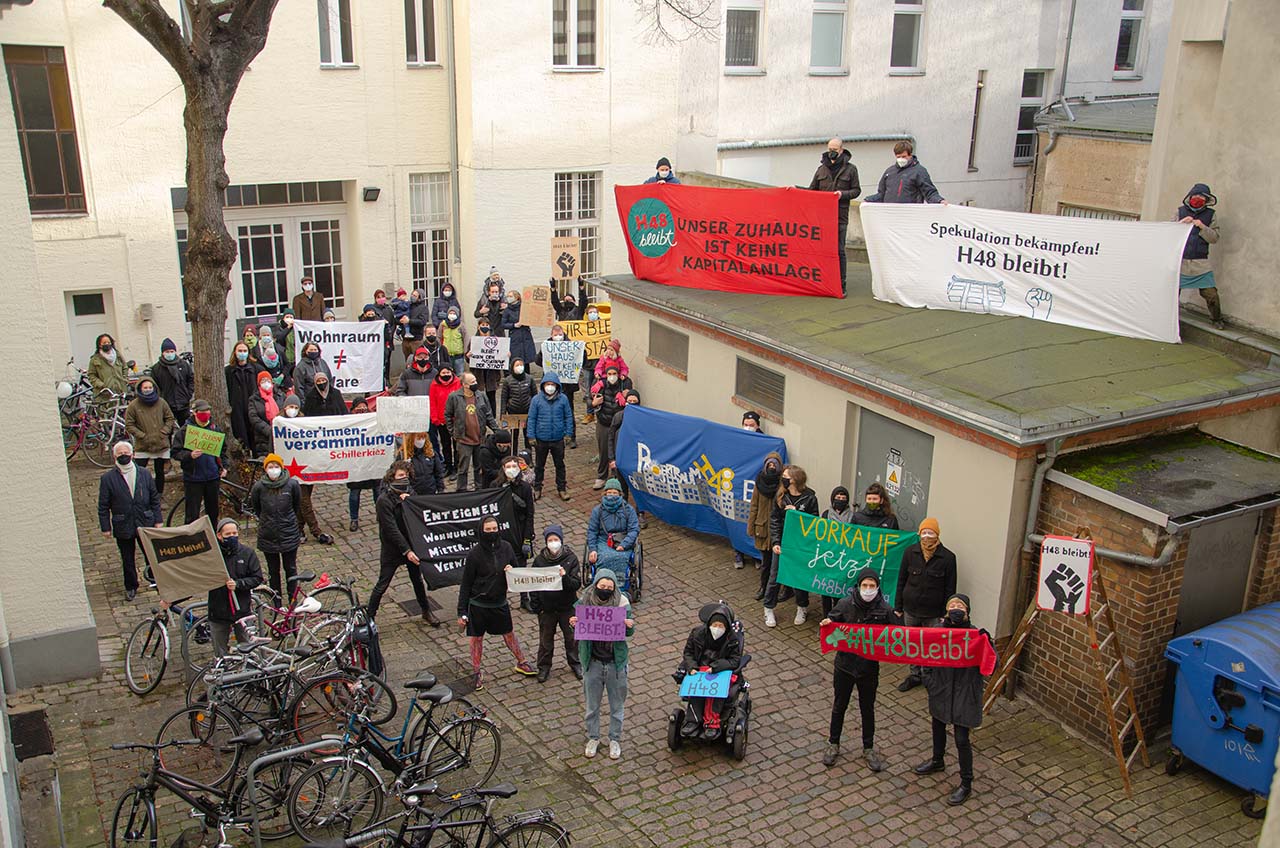 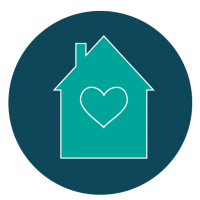 More than 140 people live and work at Hermannstraße 48 – some of them have been doing so for decades. H48 houses families, individuals and large shared flats. There are also various businesses such as a wood workshop, a hairdressing salon, locksmiths/shoemakers and therapy centers.

Our tenant community is a cross-section of Neukölln neighborhoods: pensioners, children, students, wage labourers, unemployed and self-employed persons, artists and craftspeople. Flint (Women*, Lesbian*, Inter*, Non-binary* and Trans*) and BIPoC (Black, Indigenous and People of Color) persons live here, as well as disabled persons and people who simply cannot afford a rent increase. For all of us, Hermannstraße 48 is our home and shelter.

We enjoy living and working here and want to continue to do so. Other affordable residential or commercial space will probably no longer be available to any of us.

The inhabitants of the factory building in the 2nd courtyard find themselves in a particularly precarious situation. The large shared flats, which have in some cases been here for 40 years, only have commercial rental contracts. These offer no cancellation protection.

It doesn’t take much imagination to predict what investors want to do here: kick out the large shared flats and replace them with luxury lofts or start-ups.

One shared flat has already had its rental contract cancelled, and its renters were forcibly evicted when they didn’t want to hand over the keys. It is important for us to preserve these spaces, which enable alternative living possibilities beyond the nuclear family and one-person apartments.

In addition to apartments and businesses, H48 is also home to the project room, financed on a solidarity basis. It is managed by various initiatives and groups and is used for lectures, film screenings, discussions and many other events. The space is also used by the house community for regular meetups and table football sessions (not during the pandemic, of course).

The project room is an important political networking space in and for the neighbourhood. Such spaces have, it goes without saying, consistently been threatened in the past and many have faced eviction. 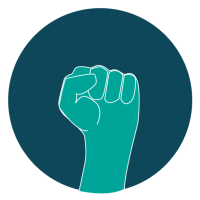 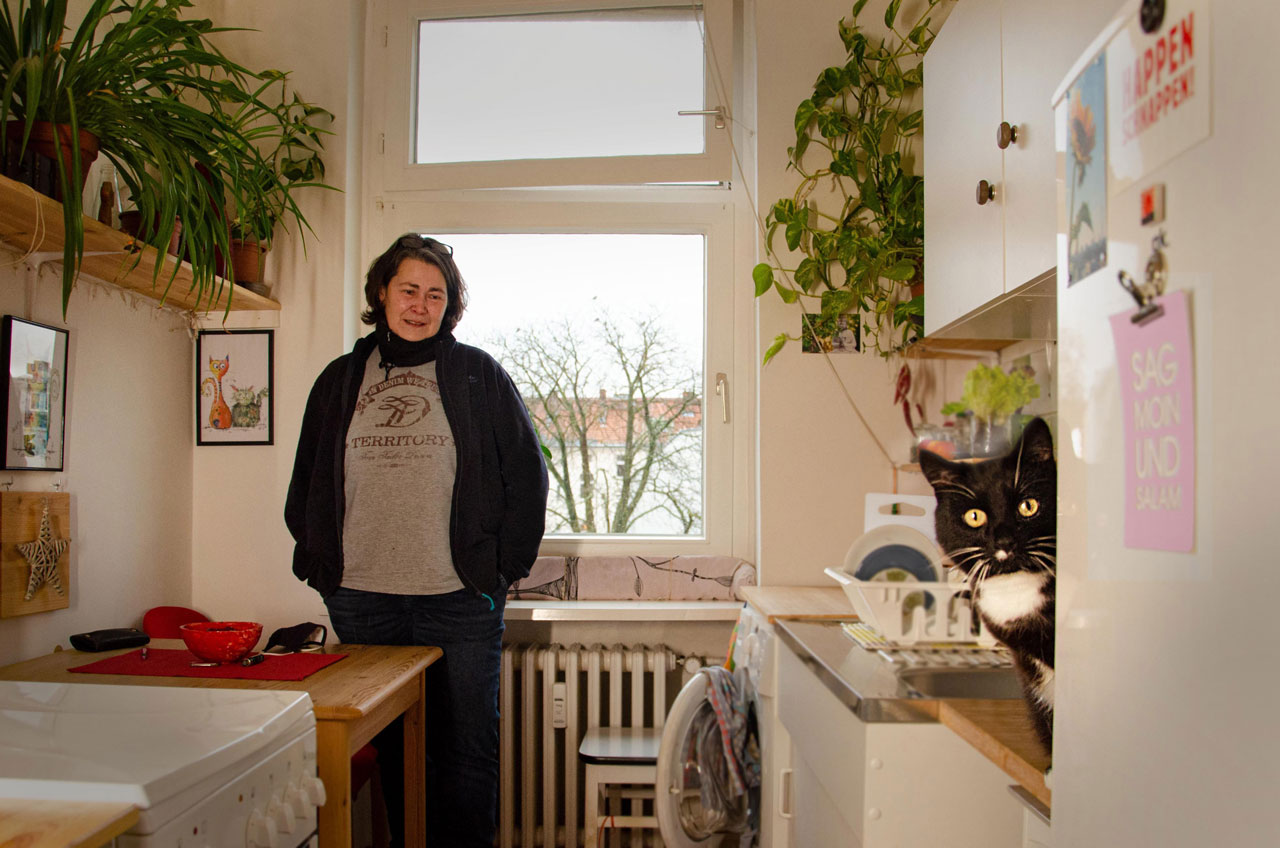 I found this little refuge in the backyard of Hermannstrasse with my two cats, at the last minute, 4 years ago. I love the view from my kitchen and the quietness in my apartment, although it is in the middle of the hustle and bustle of Neukölln. For the future, I hope that no luxury redevelopments are done, and that the rents remain affordable - and I would really love flowers outisde the windows and green space on the garage roof. 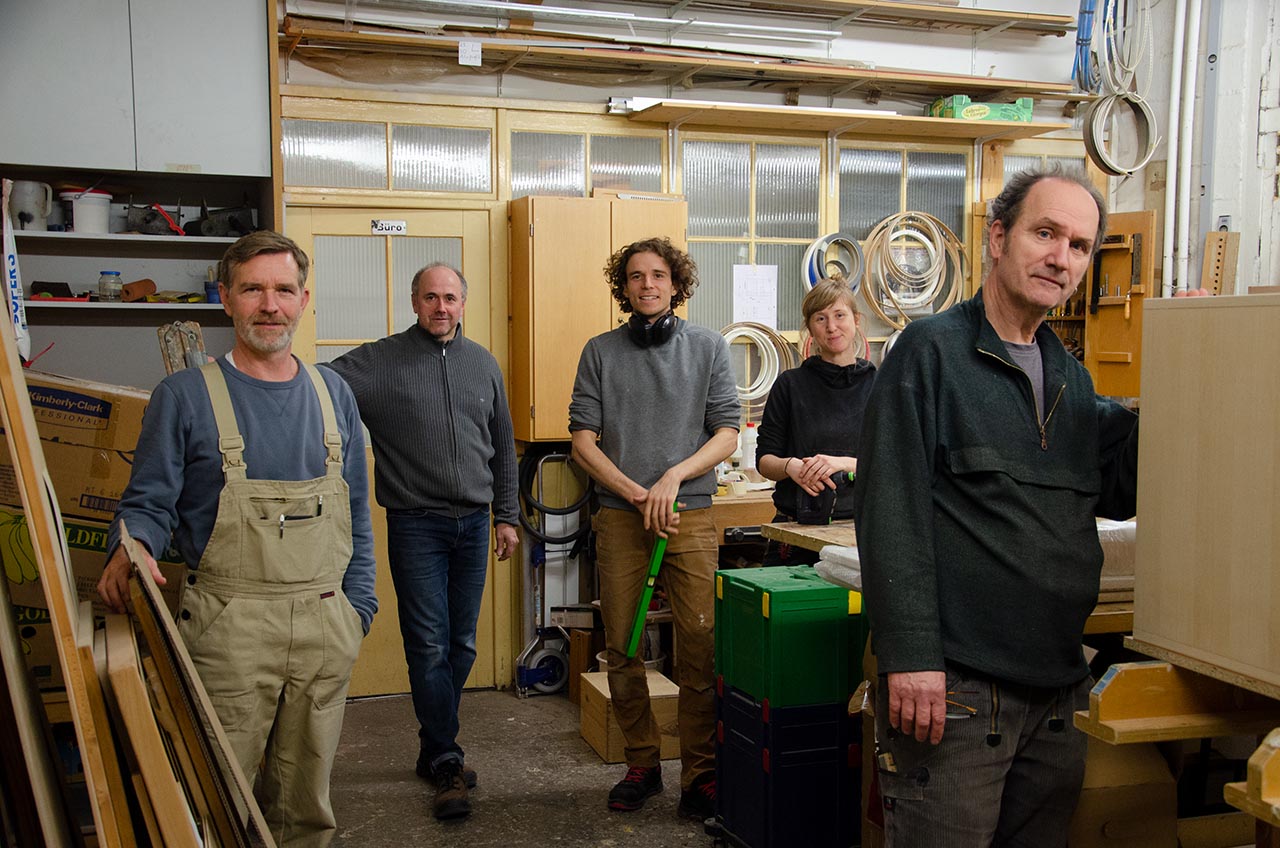 The wood workshop Buhl and Kircher has been working in the Hermannshof factory building for 19 years. We manufacture furniture and interior fittings in the traditional way, our clients are located in Berlin and especially Neukölln and the surrounding districts. Since the start-up of our backyard carpentry in Neukölln, we have successfully trained 15 apprentices as associate tradesmen and women. We are in good neighborly relations with the other units in the industrial yard and the associated residential buildings. We sincerely hope to continue practicing our commitment to traditional craftsmanship at Hermannshof in the next decade, and that our jobs and apprenticeships will remain secure for the future. 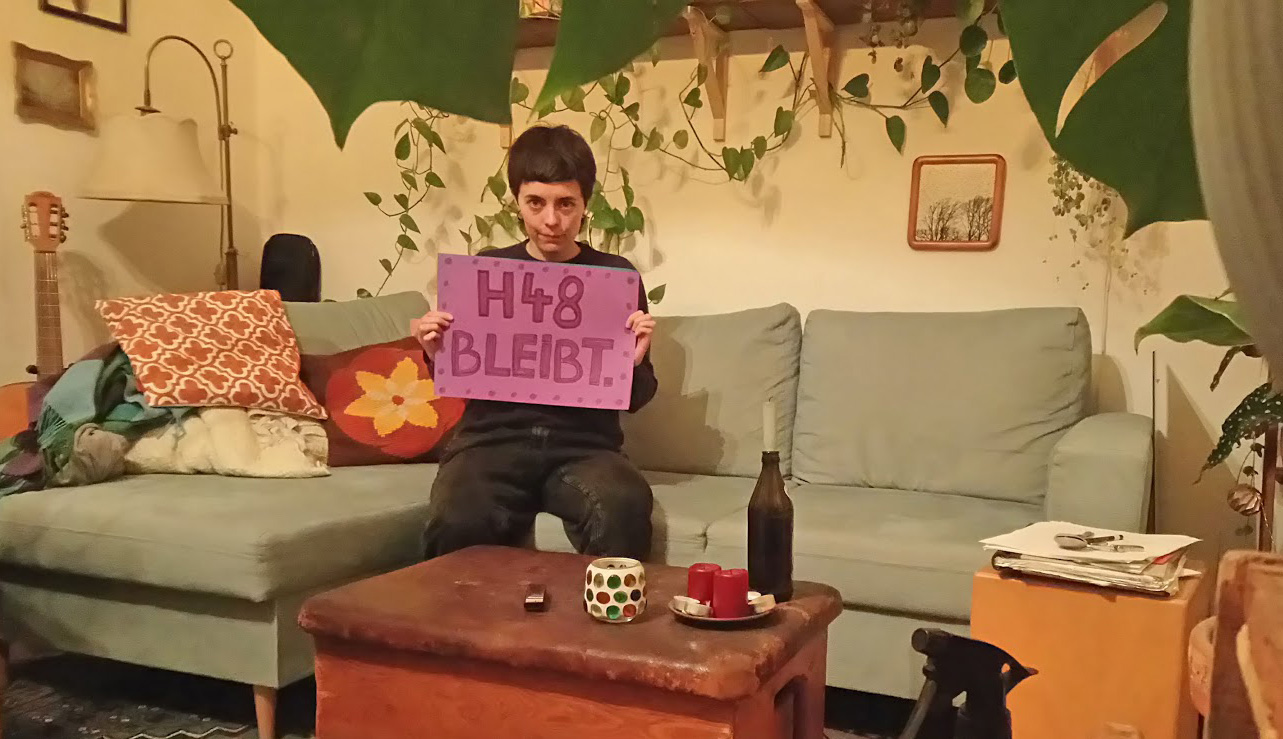 I moved to Berlin ten years ago and, like so many, have stuck around. Not least because I felt so comfortable in my large shared flat in H48. For me, friendships for life were formed in this house. In the meantime, I live alone, but I have remained loyal to house number 48. It was a great luck for me to get this apartment and I invested a lot of love and time in it. I wish that my neighborhood will be preserved and that everyone can stay here. I also wish for the end of capitalism as soon as possible. 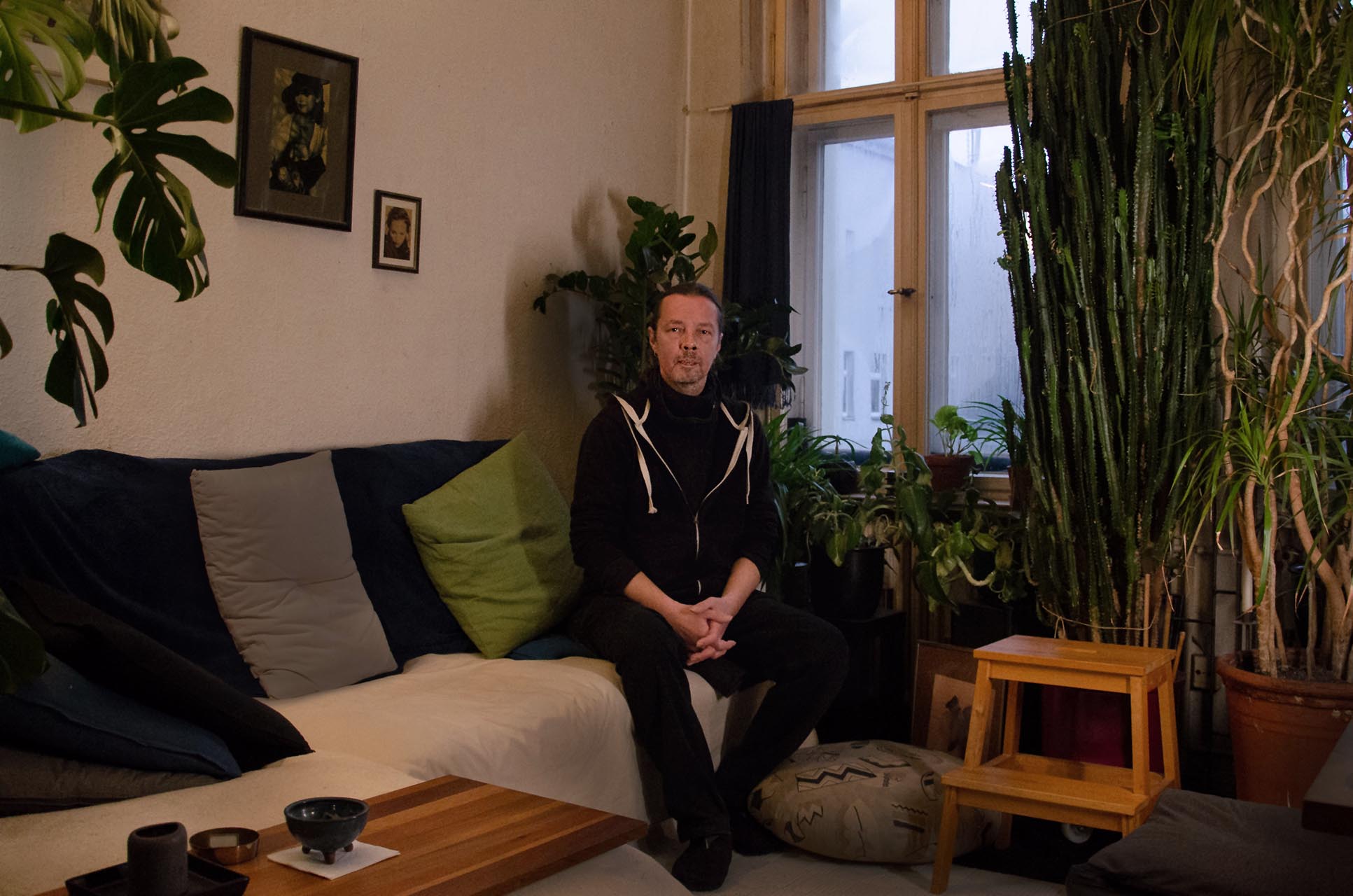 I am a professional carpenter and have completely built and renovated my apartment myself. When I moved in, it was pretty run-down, I had to scrape old newspapers from the nazi times from the walls, under several layers of wallpaper. Since that time, over 30 years ago, my plants have also been growing. Once in the 90s a fire shut down the power supply in many sections of the building for a few days, which created an impressive atmosphere: There were candles everywhere in the windows and some neighbors came to my house to cook, because I had a gas stove that was independent of electricity. Today I am happy about the house meetings (Haustresen), through which I also get to know my neighbors. 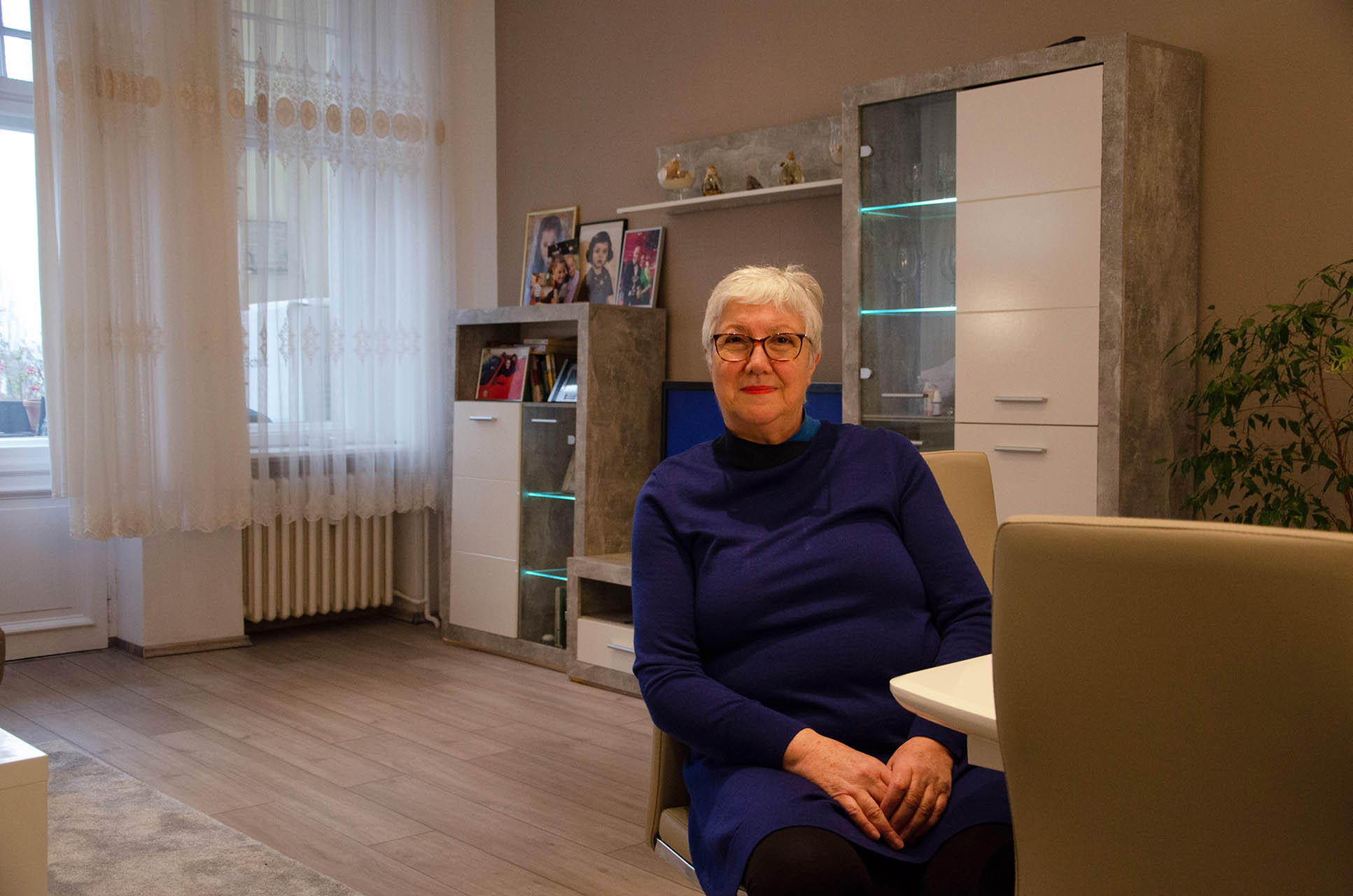 I came to Germany in 1972 when I was 16 years old and have lived in this apartment since 1982. I raised my two children here and am very happy that my grandchildren come to visit so often now. I love living here in this district. When I go to Hermannstrasse, to the bakery or shopping, I know people everywhere. Many of my friends live here in the neighborhood, so it's very important to me to be able to continue living here. 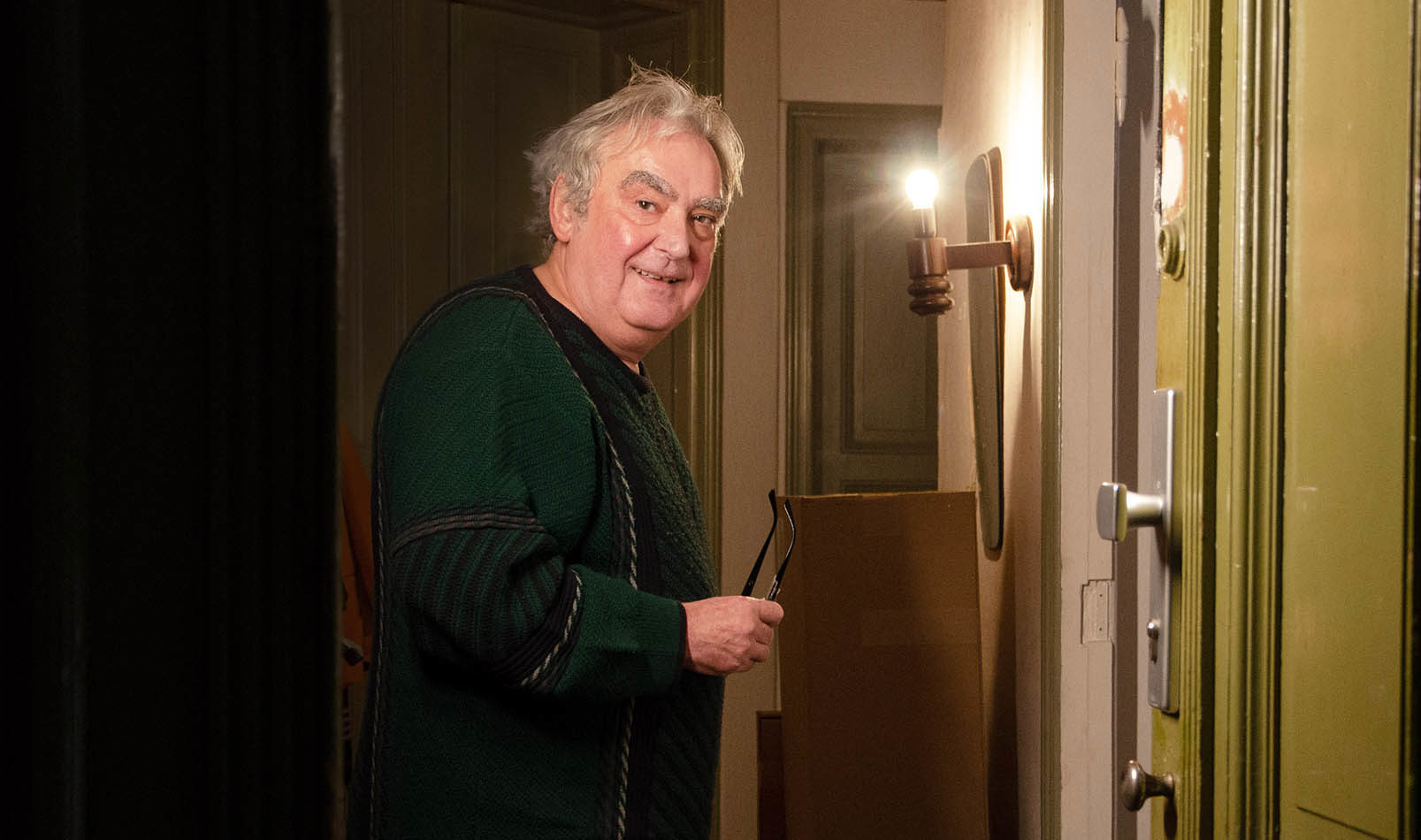 I used to be responsible for checking in luggage at Deutsche Bahn. Since the fall of the Wall, I've been retired and have been taking care of mail and parcels here in the buildings ever since. The mail delivery person already has my phone number and calls me before coming by. Often the post office and other courriers bring parcels directly to me and I make sure that the residents are informed. I also help if the post office is looking for certain people in the house. I really hope that I can continue to stay in my apartment. 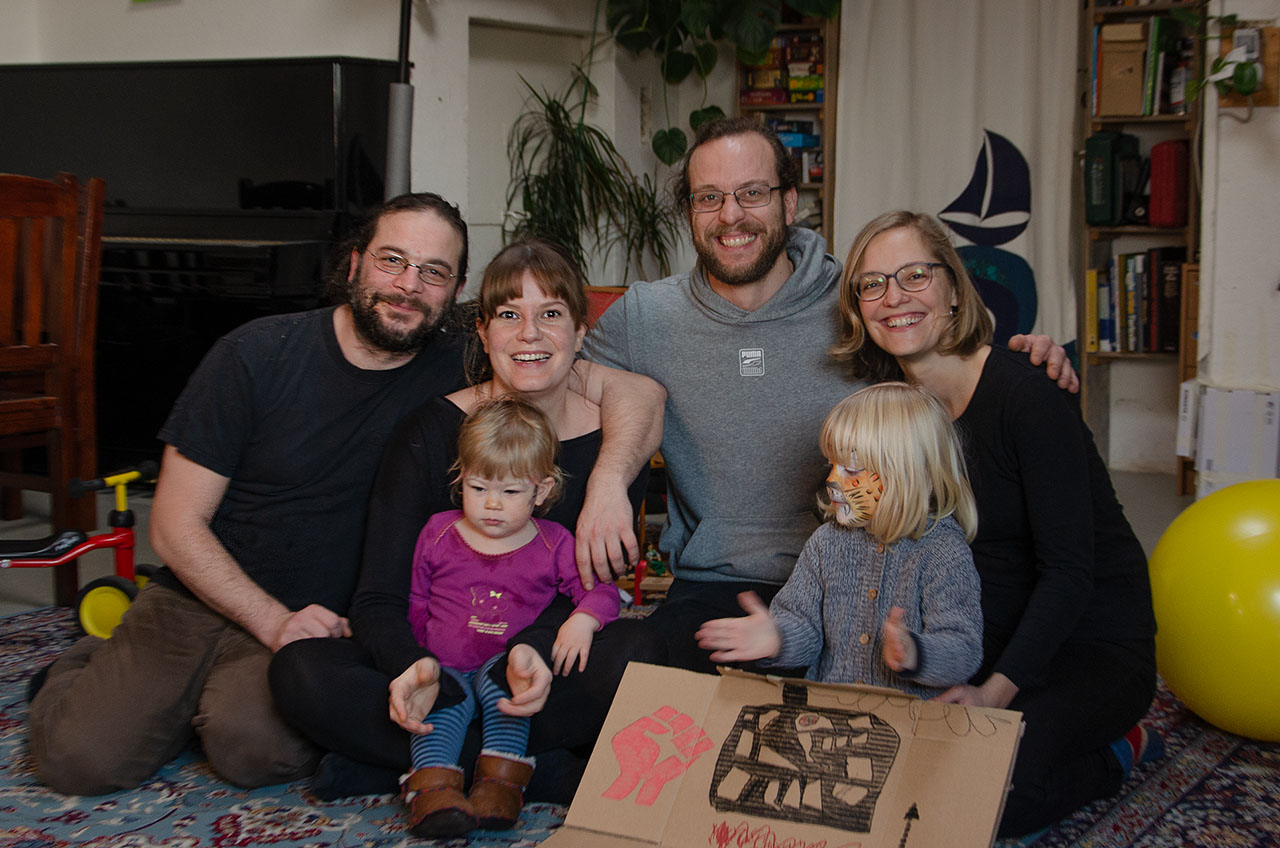 We moved to Hermannstraße 48 some years ago and love both the quiet in the backyard and the hustle and bustle at the front of the street. We live a rich community and neighborhood life both within the house and between the houses - even as the pandemic makes it impossible to have gatherings, house parties and courtyard parties at the moment. When our first child and, a little later, our second child were on the way, we decided that we would like to continue living with our flatmates in the flat-sharing community. We wish for the house community that we can all live permanently in the H48 - and that we can have agency and determine together how we do that! 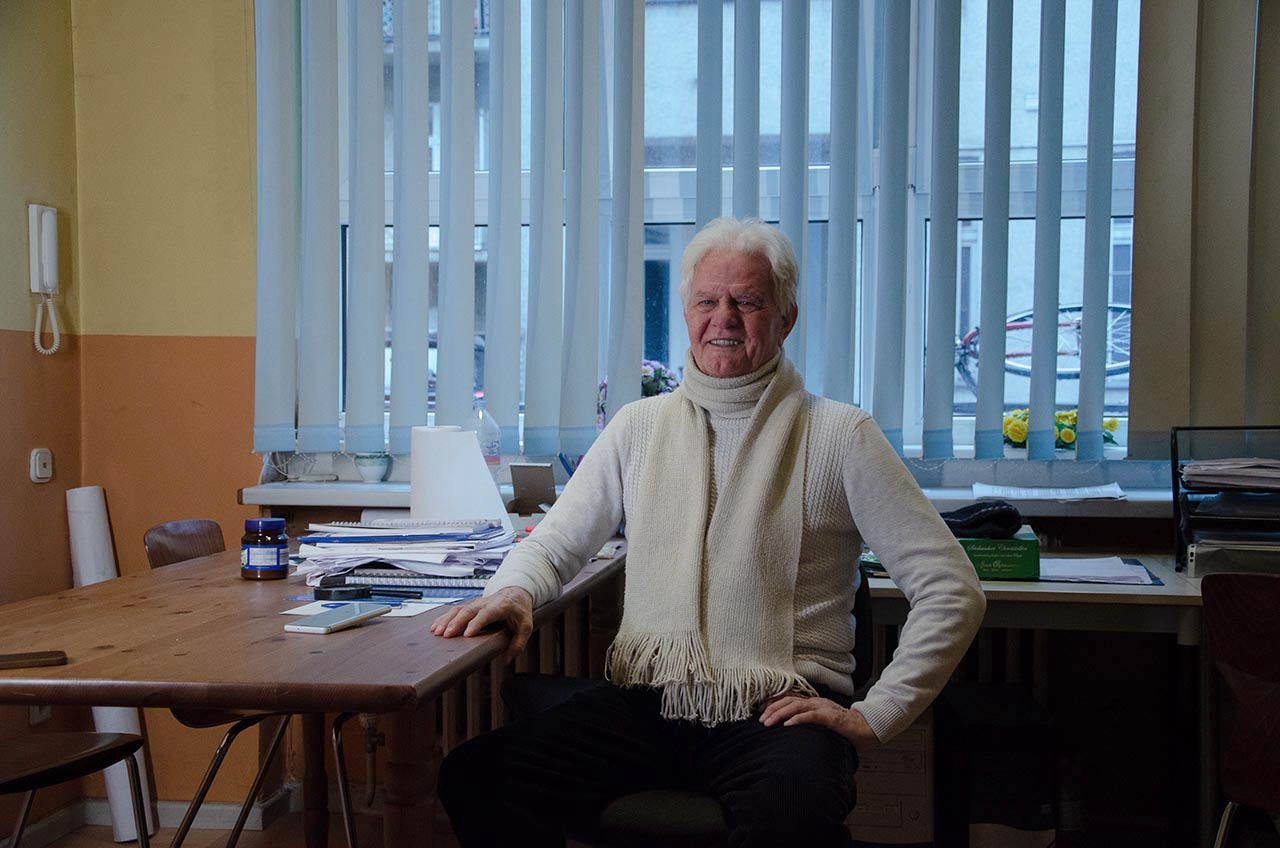 When my father's carpentry shop in Izmir burned down completely, my original plan was to come to Germany for only one year, to work and save up for building a new carpentry business together with a friend. But I fell in love and started living with my wife in Hermannstrasse 48 in 1987. I founded a limited company for concrete, steel, masonry and roof construction work, and I found office space directly in the same building complex. My commute is extraordinarily short: down the stairs, over to our second backyard, into the factory building. I hope that no major disruptions will come our way, and that I will be able to hand over my business to be able to travel when I retire. 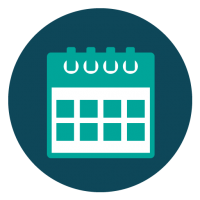 We participate in 48h Neukölln! 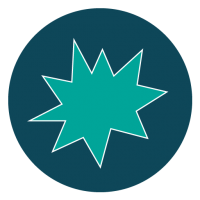 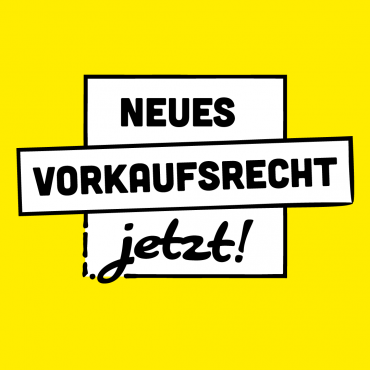 The decision of the Federal Administrative Court of November 9th, 2021 renders the municipal right of first refusal useless as an instrument against displacement. This is unacceptable! In Berlin alone, tenants in over 9.000 flats are acutely threatened. That is why we have joined forces with other initiatives and housing associations in the initiative "New right of first refusal now!" More on this under 'Press'. 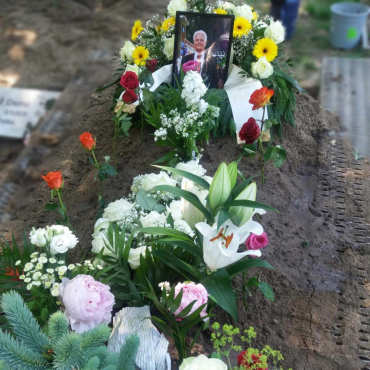 Our longtime neighbour Arslan Demir passed away on May 26, 2021. We are deeply saddened by the sudden loss of this warm-hearted and genuine person. Hermannstraße 48 was home to his carpentry business as well as his apartment. Arslan Demir was a very sociable and enriching part of our neighbourhood and community. May he rest in peace. 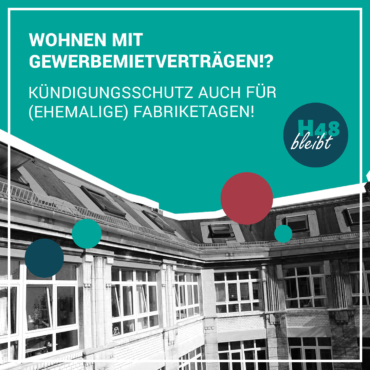 The housing situation of the people in the factory building at H48 (and elsewhere!) is particularly precarious. Scroll down to our "press release" section to find out more. *The picture says: "Living with a commercial lease? Protection against dismissal also for (former) factory floors!" 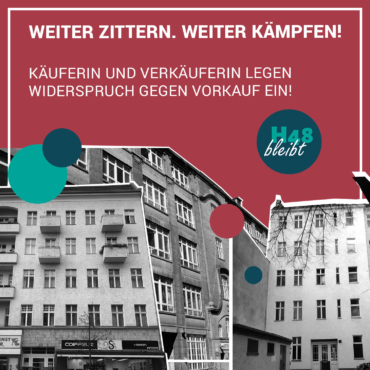 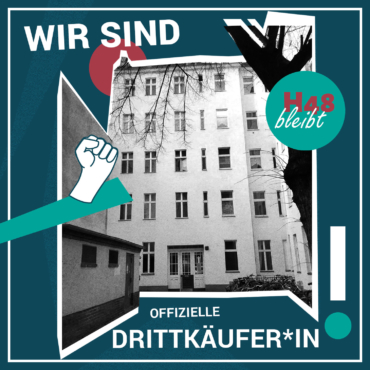 Good news: the district is exercising the right of first refusal (Vorkaufsrecht) in our favour! We ourselves are therefore the third-party buyers. Unfortunately, things are still not yet 100% certain. More soon! *The picture says: "We are the official third party buyer." 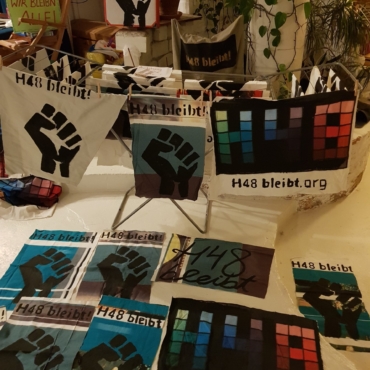 We have translated the speeches of our rally and uploaded them as PDFs.You can find them in the Press section. 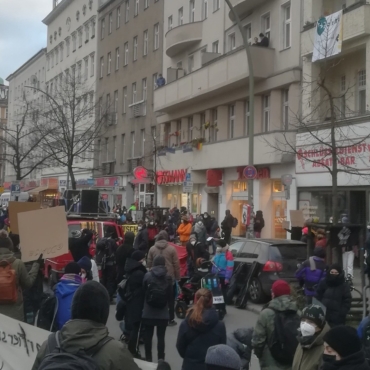 Wow! Despite the freezing cold, several hundred people came to our rally to show solidarity. We are very grateful for the support! Thank you! 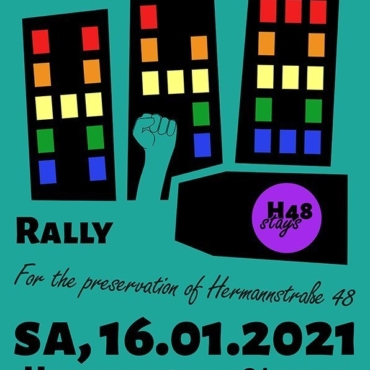 On Saturday, Jan. 16, 2021 at 3 p.m. we will demonstrate in front of our house against displacement. Come by and support us! 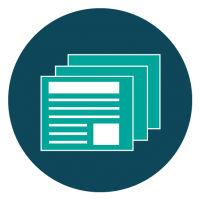 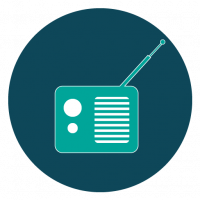 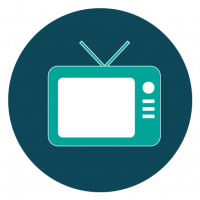 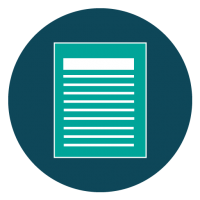 Our press release as PDF
(german) 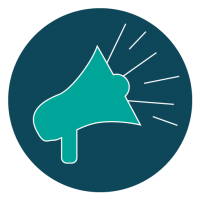 The speeches of our first rally for you to read as PDF: 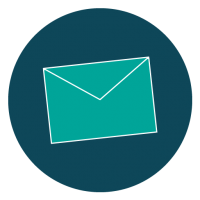 Email for other requests:
h48@h48bleibt.org